Posted More Than Ten Years Ago by Danny Wiseman

On Thursday May 29th Chase Weese Met his racing hero, Jeff Gordon. Chase has a inoperable brain tumor and at almost 12 now one of his dreams was to meet Jeff . I have become close to him as well as to his family. Being that I am his Bowling hero and having the connections to make this young man smile and forget all the pain, I had the chance at the Dover Nascar race. Frank, his Father, brought Chase to Dover thinking I was going to be bowling on Thursday but little did he know there was a surprise in the works. I had made calls, sent emails etc approx a month in advance and up till a day before to make this happen for Chase. I contacted Trish Kriger of Jeff's Foundation who contacted Jon Edwards, (Jeff's PR man) and we all figured out the date and time. On the other side at the track to get Chase into the pits , Derrick Stanley and Gary Camp were extraordinarily helpful. I can't thank these wonderful people enough ! I also have to thank Allen Bestwick of ESPN for his help with passes ! The voice of Nascar racing !!
Jeff was doing an interview and when that was over he came into the office where we all were at and WOW the look on Chase's face was priceless !!! Chase can't talk because of strokes he has suffered but there was no questioning the excitement he was feeling . Jeff was as always with kids fantastic with Chase ! Jeff asked questions and talked to Chase providing him with the most memorable day in his life ! I can't thank Jeff enough for taking the time out of his super busy schedule to do this for Chase. I will be at The Jeff Gordon Foundation's annual Bowling event in Indy in Late July again this year helping out with his event. Last year they raised $250,000 for the Riley Children's hospital in Indy. 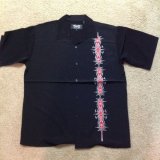